RMAF BREAKING OF FAST CEREMONY WITH THE AIR FORCE CHIEF, A SIGN OF SUPPORT AND APPRECIATION 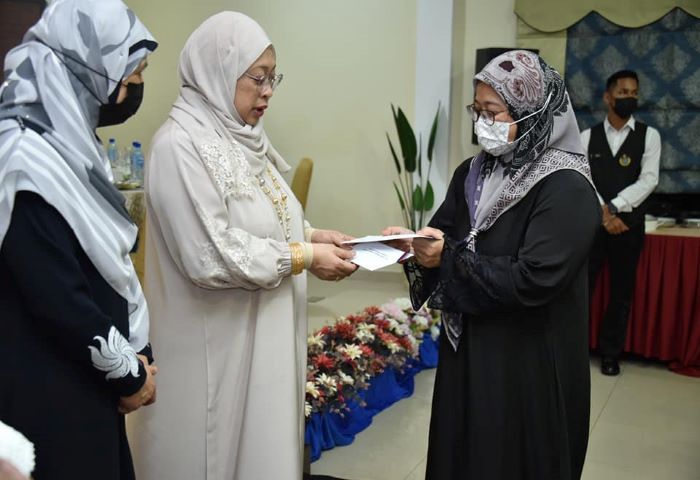 Following the breaking of fast, the Malaysian Armed Forces Chief and his wife, as well as the guests, performed Maghrib, Isyak, 8 rak'ahs of Tarawih, and Witr, which were led by the Base Religious Officer at Surau Salahuddin Al-Ayyubi, Butterworth Airbase.

After performing the prayers, the ceremony continued with moreh. As a sign of concern, the Chairperson of MAF BAKAT Supreme Council, accompanied by the Chairperson of Air Force BAKAT, presented donations in the form of cash and goods to 48 members with chronic illnesses, spouses, and children with chronic health conditions, as well as special needs children.

Furthermore, as a token of appreciation and concern, the Chairperson of MAF BAKAT Supreme Council provided a contribution to purchase printers for the use of Air Force BAKAT activities at Butterworth Airbase.

Next, the Chief presented donations to the children of Tahfiz Madrasah who were present at the ceremony.

As a sign of concern from the Malaysian Armed Forces, the base's Armed Forces Hospital (RSAT) received four (4) wheelchairs, which were presented to the Medical Officer, Lieutenant Colonel Dr. Zarina Zakiah binti Zainudin, to be used by those in need.

He also donated laptops to be used by the base. The welfare of MAF members is the responsibility of its leadership, which is consistent with the second pillar of the 21st Malaysian Armed Forces Chief Superior Order. It focuses on strengthening welfare needs, family well-being, and quality of life while ensuring the family institution of MAF members remains dynamic through the role of BAKAT.

The RMAF also appreciates and is grateful for the concern and support shown by the Malaysian Armed Forces Chief and his wife towards the RMAF members.